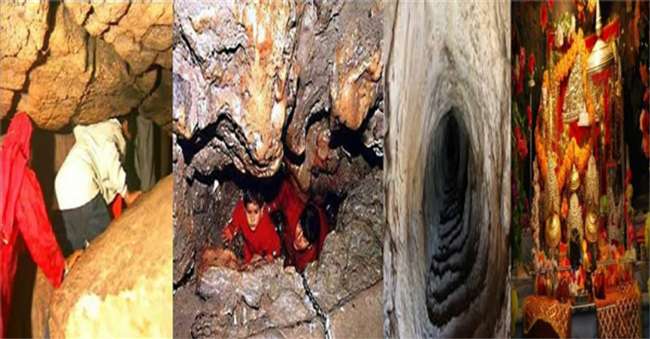 A pilgrimage to the Holy Shrine of Shri Mata Vaishno Devi Ji is considered to be one of the holiest pilgrimages of our times. Popular the world over as Moonh Maangi Muradein Poori Karne Wali Mata, which means, the Mother who fulfills whatever Her children wish for, Shri Mata Vaishno Devi Ji resides in a Holy Cave located in the folds of the three peaked mountain named Trikuta (pronounced as Trikoot). The Holy Cave attracts millions of devotees every year.

While on the way to the Darshans of the Pindies inside the Cave, one crosses a small patio type of structure on the right hand side of which is a Cave opening. This is the original/Natural Cave leading to the Holy Pindies. In the olden days, the yatries used to reach the Sanctum Sanctorum through this cave only. Nowadays, this cave is kept closed for a large part of the year. Since this cave is quite narrow, it takes several minutes for a single person to cross it and reach the Sanctum Sanctorum, every year, the natural cave is opened for pilgrims after Makar Sankranti. Following are some Interesting things to know about Natural cave of Mata Vaishno Devi: