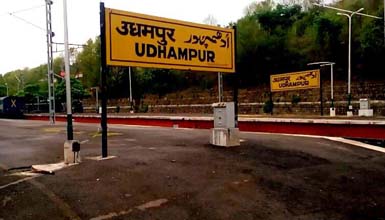 Udhampur is the third-largest city of the Jammu region and the fifth-largest city in Jammu and Kashmir. Udhampur is a lush green area replete with eucalyptus forests. Here is a list of 4 Historical Places and Monuments in Udhampur District:

2. Ramnagar Fort : It is situated in Tehsil Ramnagar, just 37 kms from District headquarter Udhampur. The Fort was built by Raja Suchet Singh about in the year 1827 AD. The Raja Suchet Singh was the youngest brother of the Raja Gulab Singh. The Samba and the Ramnagar areas were in his control, before that the areas were under control of the Bandral‟s Daynesty and the whole region was known as “ Bandralta”.

3.Sudh Mahadev: This highly revered Shiva temple is located at a distance of 42 Kms from Patnitop and 112 Kms from Jammu ,Legend has it that after bathing at a spring called Gouri Kund, just short of Sudh Mahadev ,the Goddess Parvati would worship the Shivling here that is believed to be at least 3000 years old .The temple also houses a black marble statue of local Shiva and Parvati .A trishul of Lord Shiva is also preserved here.Pilgrims in large number visit the shrine on the full moon night Of Sawan to participate in the festival to worship Lord Shiva. The mystical underground stream,Devak believed to be as sacred as the Ganges originates at Sudh Mahadev and disappears among the rocks some distance downstream .

4. Moungri Cave: In the ancient times the village Moungri was known as Sonara. The word Sonara means a land of hundred water springs. In Dogri language, water spring is called Naaras. According to the legend, it was an abode of Nag Devta (King of the snakes), and once hundreds of natural stone made water springs used to flow. Still at present number of such water springs found in the area.