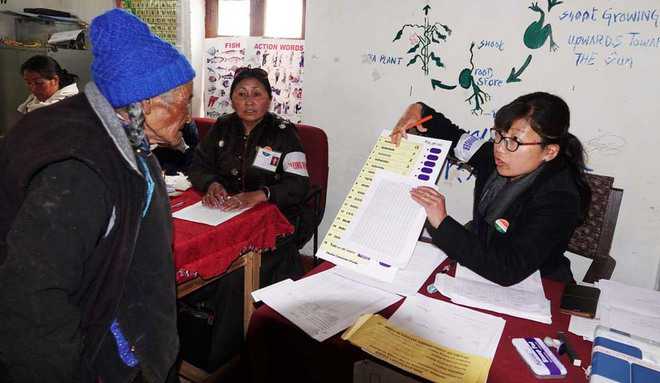 Despite tough geographical terrain and hostile weather conditions in the snow-bound and inaccessible remote areas, Ladakh on Monday kept up the trend of a high turnout by recording an overall impressive poll percentage of 71.10.

Women folk set an example in the remote Ladakh region again on Monday when they manned 49 polling stations in the Leh district.

Despite several challenges, the women staff performed their jobs while ensuring smooth conduct of voting. Leh district is part of Ladakh parliamentary seat which went to polls in the fifth and last phase of elections in the state on Monday.

The deployment of women at polling stations started during the 2018 panchayat elections, when there were at least 29 polling stations in Leh district which were manned by 99 women employees.

During the 2014 parliamentary elections, the overall polling percentage in Ladakh was 70.78.

Having Kargil and Leh districts, Ladakh has 1,74,618 voters. There are four Assembly segments — Kargil, Zanskar, Leh and Nubra — in the region. The Election Commission of India had set up 559 polling stations across the constituency for smooth conduct of the electoral exercise.

The highlight of the polling in the Ladakh region, which marked the end of fifth and final phase of the Lok Sabha polls in Jammu and Kashmir, was a massive turnout in the remote Zanskar Assembly segment in Kargil district. The segment saw 81.98 per cent voters coming out cast their ballot, followed by 78.6 per cent in the Kargil segment.

However, Leh district witnessed a slight drop in voting as 61.68 per cent of the electorate voted in the Leh segment as compared to 63.67 per cent in the 2014 polls while the poll percentage in the Nubra segment was 67.70.