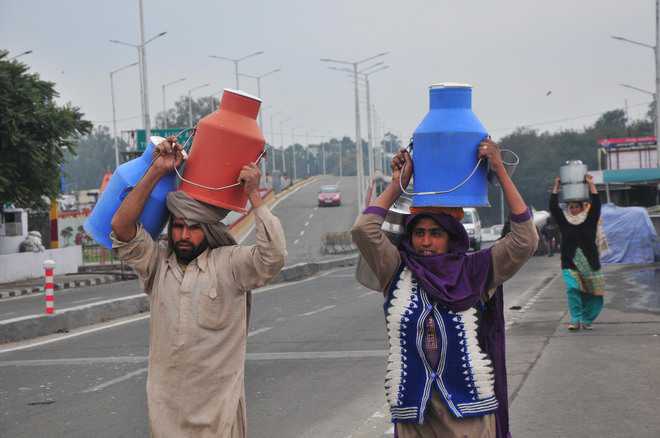 Gujjars of Jammu who provide milk to shopkeepers and households are untiringly reaching mohallas to help the needy.

On the third day of curfew in Jammu, Gujjars were seen with cans loaded on their heads reaching various places in city to sell milk.

“We were asked by many people if they will get milk in wake of the curfew. Though we expressed helplessness, we later decided to move on foot with whatever quantity milk we could carry on our heads,” said Saqina Bano, a Gujjar woman from Kot Bhalwal, who along with her husband and son reached Rehari Mohalla to provide milk to people.

Sakina is a regular visitor to the area and ferries large quantity of milk but now, she has been coming on foot from Kot Bhalwal to sell milk to households.

“I ensured that children get milk. I am feeling satisfied to have done my part in these difficult times,” said Noor Mohammad, another Gujjar, who had come from Gajansoo, Marh.

Many people, especially mothers, expressed gratitude to the Gujjar community for their efforts.

“For past two days, I have been trying to feed my child with milk powder, but to no avail. On Sunday, I finally got cow milk and could feed my child,” said a relieved Vaneeta Gupta at Rehari.

People in the city were seen praising Gujjars for taking up the yeoman’s work and keeping supply of fresh milk uninterrupted.