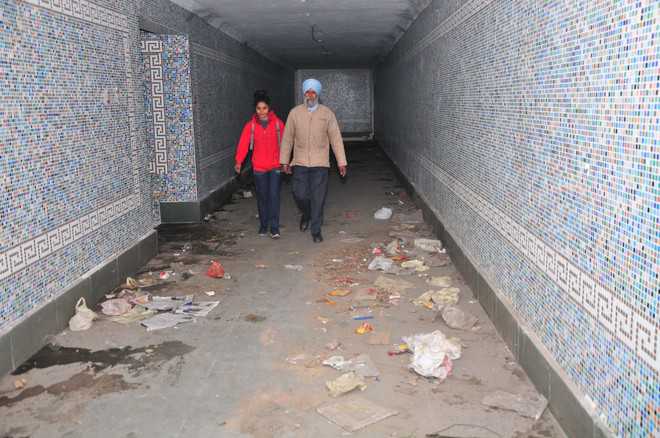 The recently constructed underpasses at various places in Jammu have very quickly become a safe haven for drug peddlers and alcoholics.

Taking, for example, the underpass at Bikram Chowk between Kala Kendra and Government Polytechnic College; the entire underground stretch can be seen littered with empty bottles, syringes and intoxicating medicines.

The whole stretch also stinks of urine and excreta which has made impossible for pedestrians to move through it. Women also fear taking this route.

According to Beli Ram, a local cobbler,

“When it was built two years ago, the underpass was frequented by public but soon, it started getting used by alcoholics and drugs peddlers. So people stopped moving through it”

According to him, many locals as well as migrant labourers use the underpass every morning to attend to the call of nature, which has left the place stinking and hence impossible to move through.

Chairman, Team Jammu Zorawar Singh Jamwal says that their organisation is a watchdog on drug peddlers, and has often informed the administration and police about the illegal activities.

Similar is the condition at the underpass in Digiana area which is full of filth and muck. The underpass connects to Industrial Estate on the one side while it opens near a school on the other side on the Jammu-Pathankot highway .

Devoid of any lighting system and sanitation, it is a dark and dingy stretch which is only used by drug addicts and liquor consumers.

[with inputs from online reports]