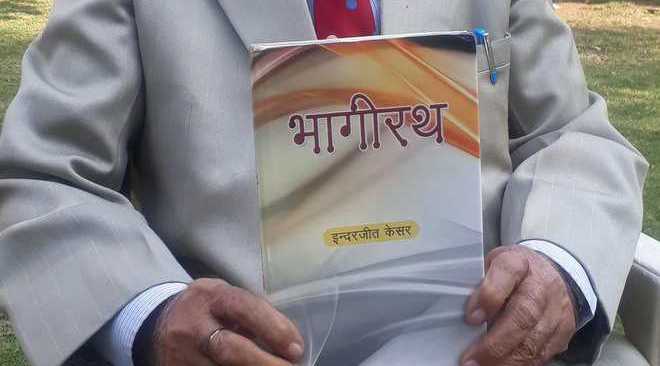 Inderjeet Kesar will be awarded for his novel ‘Bhagirath’. Inderjeet Kesar’s book is among the six novels that have been selected for the award this year from across the country.

The award will be conferred upon him at New Delhi on January 29, 2019.

Expressing his delight, Kesar said that he feels honoured as contemporary Dogri literature was getting recognition across the world.

Although Mr Kesar has been writing since 1967 it was in 1998, that he published his first book.

Since 1998, he has written 21 books, including six novels, 11 poetry, two short stories, one essay and one devotional song.

Citing reason of publishing so late in his career, he says,

“I could not print my work during my service because of time constraints. So, I kept my writing to myself. In 1998, my wife Savitri Kesar encouraged me to get my work published. Since then I’ve tried to get a book published every year”

He believes that future of Dogri shall be bright only if the young generation was encouraged to write and speak in their language.

For the past 15 years, Kesar’s book ‘Matreyan’ was being taught to BA students.

At present, his novel ‘Moorto’ is a part of the BA course, while ‘Jaul is being taught to MA students.

Apart from these, he has compiled two other books for the Sahitya Akademi — ‘Dogri Geet’ and ‘Ekkaani Natak’.