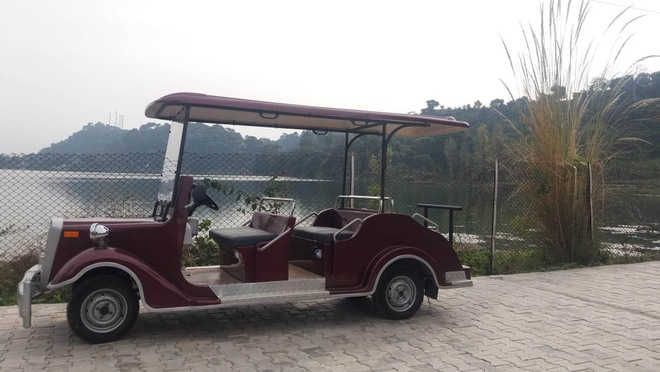 The fact that Mansar and Surinsar lakes of Jammu region are facing existential threat due to lack of funds and proper implementation of conservation plans, official agencies are investing lakhs in buying luxurious battery-operated cars. Many eyebrows have already risen due to the move. Here is why:

It is said that the wildlife department and Surinsar Mansar Development Authority (SMDA) is introducing these vehicles as part of “eco-tourism” promotion.

The moves comes at a time when the basic infrastructure is crying for attention.

According to news reports, three battery cars would be first introduced by the wildlife department around the Mansar, largest freshwater lake in the Shivaliks. One car has already reached the site for trials and operational modalities are being formulated to operate these.

Similar arrangement will be made for the Surinsar lake in coming months.

“The government needs to invest in the sewage treatment plant, curb pollutants and make plans to save the pristine lake. These luxurious introductions will not solve any issue. What is the need for these? There is not much space for their operation”

Manhas has already filed a complaint in the State Accountability Commission to direct the government to save the water bodies of J&K.

The twin Surinsar and Mansar lakes fall within the Surinsar-Mansar wildlife sanctuary situated between the Shivalik and Jandhra ranges covering a vast area in Udhampur, Samba and Jammu district.

These lakes have been brought under the National Wetland Conservation Programme.

The regional wildlife warden, Tahir Shawl says that battery-operated vehicles would be introduced to allow tourists, especially children, enjoy the ride and keep a check on carbon footprints.

Tahir further says, “We are still considering their feasibility. They are not fully operational yet”.

When asked to comment on plan to safeguard the Mansar lake, Shawl said,

“We have already asked people not to feed the fish. A major conservation plan based on latest research will be implemented soon, which has already been discussed by different agencies”

It is pertinent to mention that locals complain that the jurisdiction of the water bodies under multiple agencies is the main reason for their deterioration.