The accession of J&K is a fact of history known to all of us, accession is a legal document executed by Maharaja Hari Singh, ruler of the princely state of Jammu and Kashmir, on 26 October 1947. By executing this document under the provisions of the Indian Independence Act 1947, Maharaja Hari Singh agreed to accede to the Dominion of India.

What is the instrument of accession in simpler words?  and it was explained by a Quora user.

Here’s what he wrote:

Simply put, Instrument of Accession is an agreement wherein a state decides to join (accede to) another state.

Now considering the case of J&K, The Instrument of Accession was signed between Maharaja of Kashmir Hari Singh and the Government of India.

India and Pakistan had both gained freedom and as many as 560 princely states were given a choice of freedom or to join either states. While most princes joined the Indian state because of obvious geographic/political reasons (being surrounded by India on all sides, very small size with respect to India, people’s sentiment etc), the Maharaja of Jammu & Kashmir tried to stall making a decision, because of a couple of reasons:

Firstly, he was geographically close to both India and Pakistan and was trying to sit out with hopes of striking a better deal.

Secondly, the state of Jammu & Kashmir was one of the largest princely states in India (surpassed only by one or two other states like Hyderabad, which too did not give in easily). The rulers of these large states were not ready to easily give up their states, just because British had left. They tried to stake claims of Independent states.

There’s an anecdote that when Lord Mountbatten came to Kashmir on Nehru’s insistence to persuade Maharaja to make a decision, he faked a stomach-ache and tried avoiding him.

Also, Congress had also been pushing for Independence of princely states during freedom movement and hence Nehru had been a vocal supporter of Shiekh Abdullah, who had launched numerous agitations to overthrow the feudal rule of Maharaja.

The Maharaja might have waited longer but Pakistan lost its patience with him and sent tribals to Kashmir, in order to capture Kashmir. (The decisions to send tribals was taken as the armies of India and Pakistan had not been divided till then and were under British generals, who refused to oblige to Jinnah commands of sending troops to fight in Kashmir).

This came as a death blow to Maharaja’s dream of being an Independent ruler, and as a final resort decided to sign the Instrument of Accession to join India as India had refused to enter a foreign land.

Why is it controversial?

The Indian leadership, was idealist in nature and realized that the Instrument was signed by Maharaja under duress and this was not a precedent that the Indian democracy was to be based on.

Thus, it was decided that the people of Kashmir too should have a say in deciding their future. An important point to note here is that, at that time the Kashmiri population, regardless of religion, wanted to join India as is illustrated by the stand of Shiekh Abdullah (who was the tallest leader of Kashmir and a socialist like Nehru, and had denounced the Two Nation Theory repeatedly). The Indian leaders were thus sure that their action, taken for welfare of Kashmir, had an silent sanction of the people of Kashmir.

The Instrument of Accession was later ratified by the state assembly under the leadership of Shiekh Abdullah who said in his famous speech that Kashmir wished to be a socialist state like India implementing land reforms to help poor and could never join a feudal state like Pakistan just because of religious similarities of the majority communities.

First page of Jammu and Kashmir’s Instrument of Accession. Second page of Jammu and Kashmir’s Instrument of Accession 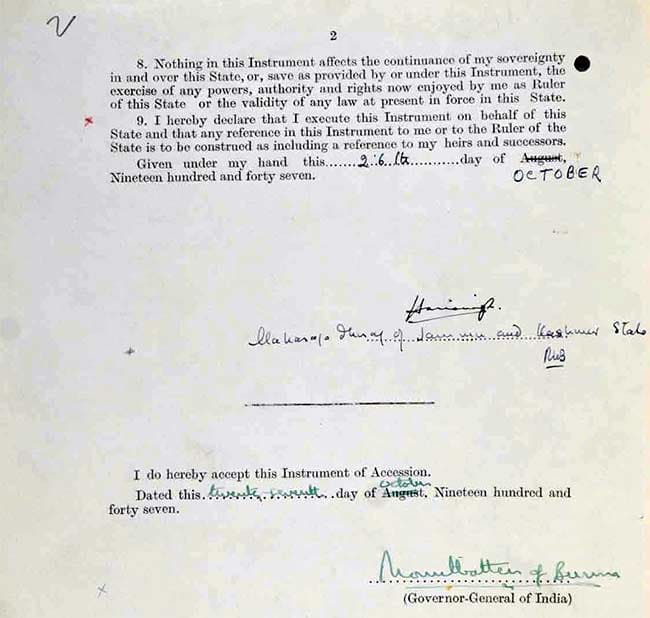