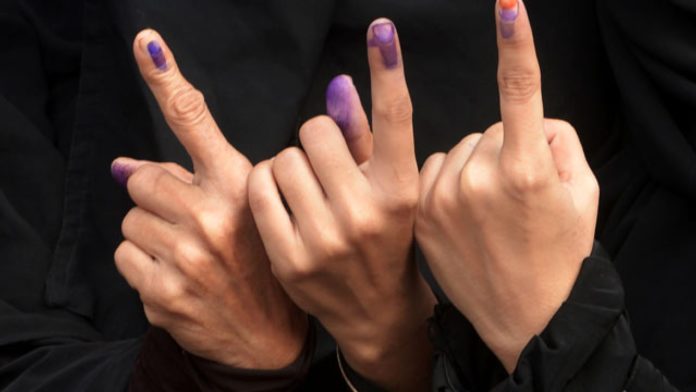 With the end of the voting on Tuesday, the curtain fell on the 4-phased election to the Urban Local Bodies in the state. Continuing the trend of low voter turnout, just 4.2 per cent electorate Tuesday turned up in the final phase of urban local bodies elections in militancy-wracked Kashmir Valley, drawing curtains on the four-phased polls in Jammu and Kashmir.

Polling began at 6 am this morning amidst stringent security arrangements at 308 polling stations in the twin districts of Srinagar and Ganderbal and ended at 4 pm.

Out of 2.42 lakh voters in 24 wards of the Srinagar Municipal Corporation, only 9,678 (four per cent) turned up at heavily-fortified polling stations, officials said

In fourth phase, as many as 52 candidates were elected unopposed, while none filed nomination papers for 44 wards that were going to the polls in the last phase. In third phase, the Jammu region recorded the highest turnout of 81.4 percent while in Kashmir division, 3.5 percent was recorded in which in Baramulla’s border town Uri, 75.33 percent polling was recorded. While south Kashmir’s Mattan area witnessed less than 3 percent in the third phase of UBL elections. The overall percentage in third phase was 16.4 percent.

In third phase, Wholesome of 365 candidates were in field covering 96 wards. Originally 411 candidates were supposed to contest for 207 wards. However, candidates from 49 wards in the Kashmir valley were elected unopposed in which no nomination were filed in 62 wards of the militancy-riddled valley.

In second phase of ULB elections in the State which was on October 10, in which 1,029 candidates among which 881 candidates were from Jammu and 148 from Kashmir division were in fray for 263 municipal wards, including 49 in Kashmir and 214 in Jammu. The voting took place at 544 polling stations across Jammu and Kashmir.

The state in first phase witnessed 65 percent polling in Jammu division, Ladakh region 62.1 percent, in Kashmir division 18.6 percent while in Kashmir Valley only 8.2 percent was reported. The overall voting turnout in the first phase of ULB polls in the state was 56.7 percent.

In the first phase of the ULB polls, the total number of wards were 321 wards including 238 in Jammu, 183 in Kashmir and Ladakh. In which, a total of 1204 candidates including 207 were from Kashmir, while 78 had been elected as uncontested, most of them were from valley.

The local body elections in Jammu & Kashmir, held after a gap of 13 years because of tension and unrest, saw about eight times more security personnel than the number of votes cast. The centre brought in 400 companies or about 40,000 personnel of paramilitary forces to assist the already heavy security set up in Kashmir.

It was for the first time that mainstream regional parties, who have always ruled the state, joined the boycott. These parties want the centre to take a firm stand on safeguarding Kashmir’s special status which has been challenged before the Supreme Court.

But despite the heightened security this time, the degree of fear was underlined by the fact that the state election commission kept the names of candidates a secret. In most places people didn’t know who their candidates are.

Urban Local Body (ULB) elections ended today in Jammu and Kashmir, the final percentage of the voter turnover in all four phases was recorded 35.1 percent in the state.

The counting for the four-phased polls which began on October 8 will be done on October 20.