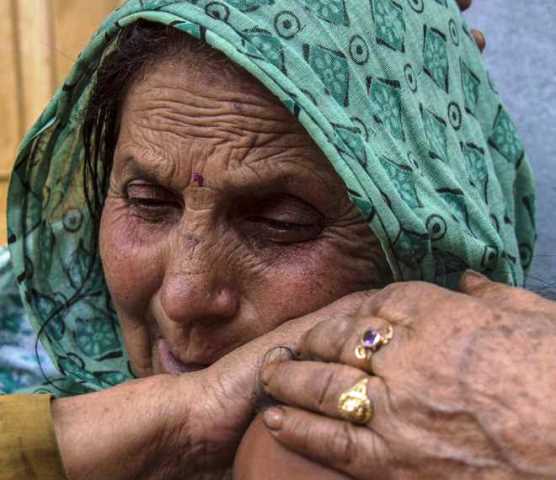 The only Hindu (Rajput) family living in Batagund village of Shopian for the last several decades had remained untouched by violence till Friday.

On Thursday, when Special Police Officer (SPO) Kulwant Singh, 35, returned home from work at Batagund village of Shopian, his mother could sense his anxiety.

But he did not talk about it as he spent time with his daughter Shubam, 8, and his son, Yudhvir, 12.At 6.30 am on Friday, Kulwant’s mother Pushpa Devi, 65, was making ‘rotis’ for breakfast when two gunmen knocked on their door and asked for Kulwant.

“They took Kulwant out of the bed. They asked him where was he working and posted. He answered that he was an SPO but had resigned,” said Pushpa Devi, while she was being consoled by her Muslim neighbours.

“Kulwant told them that by 4 pm he will show them the proof that he had resigned and was running a garment shop. But he was not given that chance. I ran after him bare feet, but they didn’t listen and took him away,” she said.

Minutes after Kulwant was kidnapped by militants, he was found dead along with two other policemen from adjacent villages in the fields.

As Kulwant’s body lay in the lawn of a two-storey house on a stretcher, Muslim neighbours made all preparations for his last rites and mourned his death. Kulwant’s father and his wife had gone to Jammu to pay condolences to the family of their relative who died a few days ago.

“His father and wife are on their way from Jammu. Kulwant’s wife, Sweety, does not know what tragedy has befallen her and her two children,” said Pushpa Devi, adding that her son was working with the police department for the past more than a decade.

Kulwant’s father, Dhrub Dev Singh, has been living in Shopian for decades among his Muslim neighbours.

“We stood by all neighbours. They have also been kind and helpful to us. Today, when my son was being taken, a Muslim neighbour begged the gunmen to leave him but they did not listen to him. Others also pleaded to them to spare my son,” said Pushpa.

Pushpa Devisaid the family was always loved and pampered by the villagers and never felt the need to leave the Valley even during the turbulent 1990s.