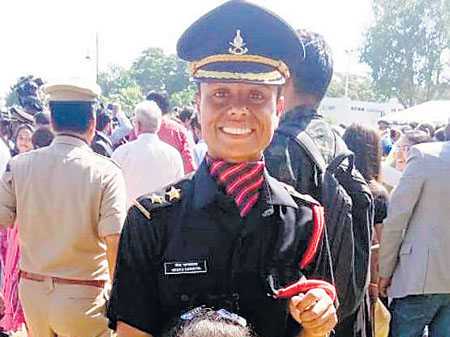 Meet Neeru Sambyal. Hailing from Samba in Jammu and Kashmir, Neeru has set an example for those trying to pick up the threads of life. Her mantra? Never give up! She summaries her ordeal as:

“On May 2, 2015, when I lost my husband, I lost everything and slipped into depression. But my two-year-old daughter gave me motivation to come out of hopelessness. I succeeded after several attempts”

Neeru Sambyal is no ordinary woman. She’s a ‘C’ certificate holder of the National Cadet Corps and has been commissioned as a Lieutenant in the Army Ordnance Corps since September 9. She joined the Army in 2017 and graduated as an officer after undergoing one-year training at the Officers Training Academy, Chennai.

Joining army hasn’t been so easy for her. Brimming with emotions, she says

“I belong to a Rajput family where lot of social stigma is attached to widows. As such, joining the Army would never have been easy… I reluctantly shared the idea with my father-in-law who not only supported it but went out of the way to help me realise my dream”
It is well know that bravery and valour is ingrained in Dogras, and especially those hailing from her native village Gurha-Slathia village of Samba district.

Keeping alive the gallant tradition of the land, it was Varinder Singh Slathia, her brother, who encouraged her to translate her “bold” decision into reality. As a result, she cracked the SSB exam in her first attempt and now wishes to serve the nation with the same zeal as her late husband would.

Encouraging other women to break free and stand up for their heart’s calling, she says

“I understand the trauma and agony faced by widows in our conservative society. I was able to take this decision only with the support of my in-laws and brother… I was least bothered what people would think after my family openly backed me”