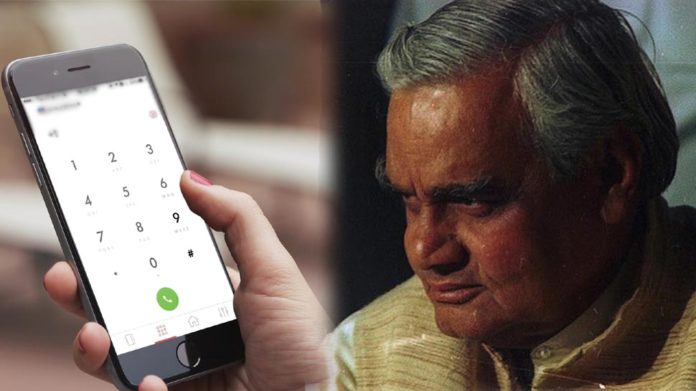 During such times, it was the then Prime Minister Atal Bihari Vajpayee, who gave green signal to mobile phone services in the state. Once the services were started, the first telephone call was made by the erstwhile Chief Minister, bereaved Mufti Mohammad Sayeed, from Srinagar to the Prime Minister’s office in month of August 2003.

“I am happy that the promise I had made has been fulfilled today,” Vajpayee said.

“On August 15, I had said that Jammu and Kashmir’s atmosphere is changing, and the launch of mobile services is a step in that direction,” he said.

He said that bringing a connectivity revolution in the country was a matter of top priority. Even the golden quadrilateral road programme was a step in this direction.

“We want to take the railways to the Valley so that commuting becomes easy,” Vajpayee said.

Bharat Sanchar nigam Ltd’s cellular services are being rolled out in J&K in a phased manner, starting with Jammu, Srinagar and Katra.

The PM had said these words at a function later,

“…the mobile services were not just for the elite and affluent, but had been effective in reducing distances and bringing people closer…

Strangely, it was around this time of the year, when he had said these words.

According to Bharti Enterprise Chairman and founder of Bharti Airtel Sunil Bharti Mittal,

“…he was a great economic reformer and can truly be called father of modern telecommunication in the country, having ushered in the National Telecom Policy in 1999, which helped the industry overcome some of its toughest early challenges”

…the telecom policy of 1999 released by the NDA government under Vajpayee paved the way for structural reforms in the sector, leading to unprecedented growth of mobile subscribers, introduction of fierce competition into the mobile telephony sector, and deep-rooted reforms in the regulatory regime, which was followed up by the amendment of the TRAI Act in 1999…”