The year was 1987, the temperature 50 degrees below zero and the place 21 thousand feet above sea level at Siachen; yet the bravehearts of Indian army led by Param Vir Chakra Captain Bana Singh beat the impossible and captured the Pakistani Quaid Post.

After the post was captured, it was renamed as Bana Post in honour of the valiant Bana Singh.

It should never be forgotten that the attempts to capture the post had begun by the summer of 1987 and in the first attempt, 9 soldiers including Lietenant Rajiv Pandey were martyred. On the second attempt also, 2 soldiers were martyred before Naib Subedar Bana Singh was given the command. It was him who climbed a vertical cliff of 150 metre height. On June 23, 1987, after reaching the top, he killed the Pakistani captors and raised the Tricolour.

For this feat, displaying exemplary courage and resilience in capturing a strategic Pakistani post at Siachen, Captain BanaSingh was rewarded with Param Vir Chakra. He retired from service on October 31st, 2000.

Tell us about yourself: Where were you born, when did you join the army?
I was born in 1949 in Kadyal district of Jammu province. My father was a farmer, though many of my uncles had joined the army. My father used to tell me that army life is very prestigious. He wanted me to join the army because a farmer’s life is very harsh.
I remember when I was a kid, I used to be so happy each time I saw off-duty army officers or jawans visit our village.

What was your motivation to join the army?
I wanted to do something for my country. That is why I joined the army.
When were you first posted on the Siachen glacier? Did you practice mountain climbing before being posted in Siachen?
I was trained at the High Altitude Warfare School in Gulmarg and at another school at Sonamarg. My battalion was trained there.
Though the altitude is not as high as in the Siachen area, we learnt mountain warfare, how to climb, how to fight in the snows, how to move on a glacier.
When I was in Gulmarg, there were three battalions – 10 Dogras, 8 JAK Light Infantry and 5 Guard. Mountain training is imparted to formations from all over India, but more particularly to this Mountain Brigade, which was specially established by the Government of India to look after the Siachen glacier. It is not only an opportunity for the battalions to be trained, but also to acclimatise at relative high altitudes.
Then we moved to the base camp of the glacier, which is located at 18,000 feet. It takes seven days to be fully acclimatised. During this period, we move to the base camp for the day and come back the next day. This is No 1 camp.
When you were posted to Siachen in April 1987, was the ‘Quaid’ Post already occupied by the Pakistanis?
Yes, they had occupied it earlier. Around that time, the Pakistanis started firing on our patrols and helicopters from the post. My commanding officer and the brigade commander decided to send a patrol to locate the position of the Pakistanis and the number manning their post.
On May 29, 1987, a 8 JAKLI patrol was sent for a reconnaissance of the possible approaches to the ‘Quaid’ Post. The patrol leader was Lieutenant Rajiv Pandey. He had 10 men with him. Unfortunately, the Pakistanis commandos sighted them and most of them, including Lieutenant Pandey, were killed. This is the name of Mohammad Ali Jinnah, the father of Pakistan. This is the most important and highest post in the area. From the top you can see 80 km around. You can see the entire Saltoro range, all the other posts like the Amar and Sonam Posts which can only be supplied by choppers.
If you control this post, you can prevent the supply of these posts located on the Saltoro range. That is why it had such an importance for Pakistan and why they named it after Jinnah.
My commanding officer therefore had to prepare a secret plan to recapture the post, since otherwise we would not be able to hold the other posts in the area.

How did the Pakistanis capture the post?
I do not know. It must have been captured long ago. The Pakistanis started occupying the glacier in 1984. When I arrived in 1987, it was already occupied.

How many people were killed on May 29, 1987?
Lieutenant Pandey, a JCO (junior commissioned officer) and 8 jawans. Total 10 people, three survived.

What was then decided by your CO and the army HQ in Delhi?
Before Lieutenant Pandey’s reconnaissance patrol, a very secret operation had been planned. We had to find the different accesses and the one which would be the easiest to get to the post.
The first patrol was sent for this purpose. With this information, my CO and the army commander were able to decide the next step.

When was the second patrol sent?
It was not a patrol. They were troops sent for fighting purposes, to capture the post. It was in June.

How was the approach route to the post at 21,000 feet?
There was a 90 degree climb for a distance of 1,500 metres, and ice walls. Lieutenant Pandey had managed to fix ropes, but due to heavy snowfall, the ropes were lost when the troops tried to reach the post in June. Ropes had to be fixed again.
In the meantime, to divert the attention of the Pakistanis, Indian troops had been firing at the post. There was no artillery fire, only machine guns. It is only when the attack began that artillery was used from the base camp. 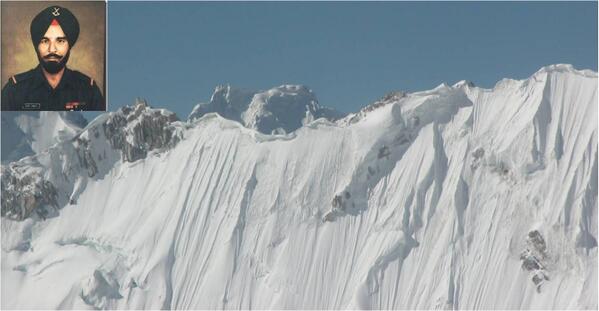 Was artillery not dangerous for the climbing troops?
It was at the beginning. We were climbing from the other side when the post was fired at.

Tell us about your operation, which was the third attempt to capture the post?
A total of 62 people participated in the final operation. Two officers, 3 JCOs and 57 jawans were selected.
The operation was conducted in three phases on June 23, June 25 and June 26, 1987.
A first platoon was sent under Major Varinder Singh on the 23rd, but unfortunately, they had to come back. Two soldiers were killed.
The second platoon led by Subedar Harnam Singh with 10 jawans made an attempt on June 25. At that time, there was no problem with the ropes, but due to some communication gap with us, the mission had to be aborted.
The next day, on the 26th, I started early and was told that we would try another attack and capture the post from the enemy today itself. A message was passed from the major general, who was the task force commander, and we got the green light.

All the 62 were volunteers?
We had been selected by our CO.

Could you refuse to go?
Yes, of course! But we all said that we were ready. ‘When you face death, you don’t feel cold, you don’t feel fear’
Tell us now about your assault? What did you feel?
It was at day time, but because of the snowfall, you could not say if it was day or night. It was snowing so heavily.

Couldn’t the Pakistani commandos see you?
No, but they must have known that something was going on because of the firing from the base camp to divert their attention. We had been trained for such a fight and how to lob grenades.
There was a single bunker on the top. I threw a grenade inside and closed the door. At the end, six Pakistanis were killed. We brought back their bodies which were later handed over to the Pakistani authorities during a flag meeting in Kargil.
Some sources say there were 17 persons manning the post.
Some must have escaped towards the Pakistani side, perhaps over the cliff. But only six were killed. I think, we bayoneted three or four persons, I don’t remember now.
When you are fighting for your life, you cannot say…

How long did the operation last?
We left by noon. The entire operation was completed by 5 pm, so five hours including the climb. Did you think of your wife or your dear ones?
No, never. But I prayed to the Gurus before and after the operation.
After having been successful, I considered myself a lucky man.
I must tell you, a strange thing happened one day before the assault.
As I was feeling depressed, I heard the voice of Guru Gobind Singh who said: ‘I was only testing you.’ Then my depression disappeared. It is the only time I have had such an experience.

‘Musharraf was very upset when I captured the Post’
When silence finally fell on the post, what happened?
All the officers started to congratulate me: “You have done very well, Bana, Congratulations”. All this through wireless.
Three months later there was a major Pakistani attack on the Bilafond Pass; they had apparently been very upset to lose the ‘Quaid’ post.

Did you participate in the defence of the Bilafond Pass?
Yes, it was in September 1987. I did not participate because I was not posted in this area. But about 1,000 Pakistani men must have died. General Musharraf was then the brigade commander of the Special Security Group. He planned the operation.
In one way, he is a loser. He lost the ‘Quaid’ Post, in September 1987 the Bilafond Pass, then in 1999 Kargil.

Do you think there is a link between these three events?
No, but Musharraf was very upset when I captured the post.
There are rumours that an agreement will be signed between India and Pakistan on Siachen and that the glacier and the Saltoro range will be demilitarised.
I feel it is not good, but I do not want to comment further because in the past my words have been distorted.
The point is that so many people died for this glacier, it would not be good to give it to Pakistan.
I have told this so many times to the media. Politicians do not know the value of the lives of the jawans. If they knew what has happened to the glacier, if they knew everything…
If tomorrow India withdraws from the Siachen glacier, the Pakistanis may take the post again.
Everyone knows that in Kargil it was the decision of Musharraf and the military to start the conflict, but he says it was Nawaz Sharif and the politicians who gave the order. Everyone knows it is a lie.
Tomorrow, if India withdraws, the Pakistanis will take Siachen, Pakistan will take it over, because they will always tell lies to the Indian government.
Sometimes I receive threats from the Pakistani side. Since I am retired, I attend some functions, but I still need permission from army HQ. Unless I get permission, I cannot attend official functions. I have two personal security officers protecting me. But you are stronger than your PSOs.
Yes, and I am not worried about my life (laughs).
I understand you had a good offer from the Punjab government?
The Punjab government has a deep respect for the Indian Army. They had offered me Rs 25 lakhs, a monthly allowance of Rs 15,000 and a 25 acre plot if I move to Punjab. But I refused.

Why?
Because I consider myself a subject of Jammu and Kashmir. My own state gives me Rs 160 a month as allowance for having won the Param Vir Chakra, the highest bravery award. It is the way we are treated in Jammu and Kashmir.

For the past 18 years, PVC Bana Singh has been mentoring and speaking to future soldiers and officers at schools, colleges, the Indian Military Academy and various other institutes.

A comic book based on his life and work is also available at schools across the country. The book can be bought by clicking here.

The Captain says that whether it is the field of sports or battle, a high held Tricolour always fills his heart with pride.