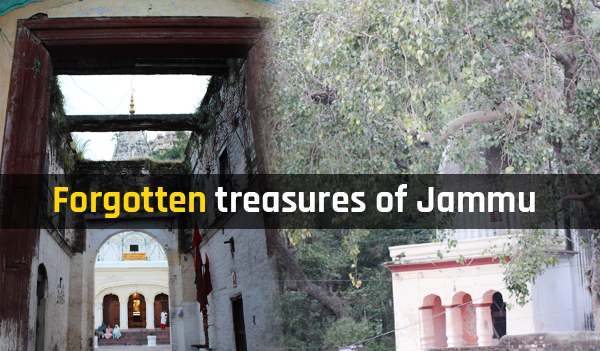 Jammu has grown exponentially over the past two decades. Its municipal limits have constantly been pushed over these years. The sharp decline in the city’s green cover and unabated urbanization of the banks of the Tawi are testimony to this reckless expansion.  Although the population as well as the labyrinth of roads around the nikki Tawi area have grown manifold, the ancient temples of the region have lost the attention and the footfall they used to receive in the past.

The trend can be attributed to the changing lifestyles of the Jammuites who are driving more and walking less to save time and meet deadlines of their ever busy life. Near the Dhounthali PHE office are two ancient and serene temples – one dedicated to Baldau (Lord Krishna’s elder brother) and the other to Lord Shiva. The former sounds like a rarity already for one cannot think of many temples dedicated to Krishna’s elder brother, and the latter is markedly attractive due to its location and simplicity. The Baldau temple is a rather large complex constructed on a very low lying area, with tiny and old houses on its periphery which were apparently donated by the erstwhile Dogra rulers to the priests and the scholars. There is also a big well, now dry, and old mango trees on one side of the complex. On the same side, but at a significantly raised platform, is the modest but serene Shiva temple. The perspective view of one temple from the courtyard of the other is enigmatic to say the least. Both these temples fall on what used to be known as the Dhakki connecting the Panjtirthi area with the Tawi river front.

In old days, the life of the city was intricately woven into the rhythms of the Tawi basin – groups of people, young and old, used to go for walks to the riverside, work out at the Hanuman Akhara by the PHE office, bathe in the river and on the way back to their homes visit the two ancient temples. Now a days, the air-conditioned gyms are preferred over the open air akhara, water is available at the turning of a tap in the kitchen and needs not be fetched all the way from the Tawi and the morning walks, if any, are confined to the circular road and the Sidhra road. Therefore, the Dhakki as well as the temples constructed along it have been receding away from the public eye.

The Baldau temple being under the patronage of Dharmarth Trust does receive some support in that it has a priest performing the daily rituals albeit without any devotees around. The Shiva temple is conspicuously in a state of neglect. No priest officiates here. The temple walls have developed cracks from within, the water pipeline to the temple is dried up or perhaps diverted into some houses in the neighbourhood and the vegetation around is totally uncontrolled and the structure seems to be disappearing into the landscape and from the public memory with every passing moment. It is painful to watch these beautiful structures die such an undeserving death in the city of temples.

If only the Dhakkis of the old city could be beautified and integrated into the planned Tawi River front scheme, many precious ancient structures like the ones highlighted here will start receiving devotees and may begin to breathe again.