BJP president Amit Shah addressed a public meeting in Jammu, days after his party withdrew support from the PDP-led government in Jammu and Kashmir.

Shah was on a day-long trip to Jammu to mark the “martyrdom anniversary” of Jan Sangh founder Shyama Prasad Mookerjee.

His public address assumed significance as he touched on the political situation in the state and spoke on why the BJP withdrew support for the Mehbooba Mufti government in which his party was a partner. Jammu and Kashmir is now under governor’s rule. 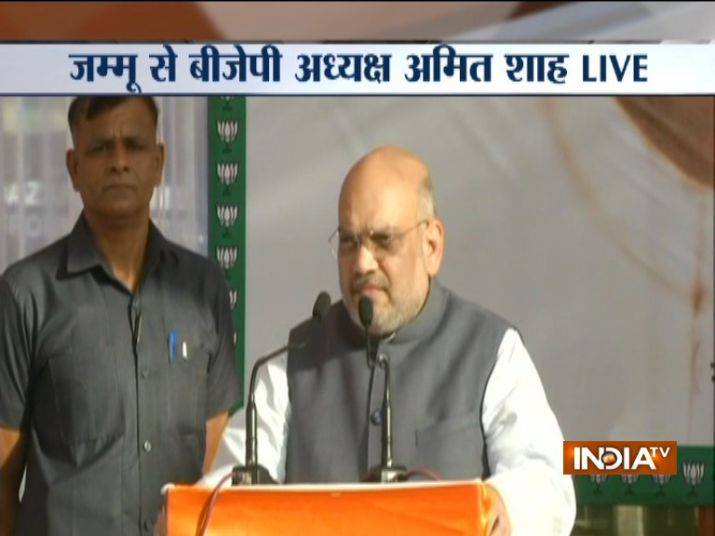 1)   BJP chief Amit Shah justified the party’s decision to walk out of Mehbooba Mufti government and accused the PDP of ignoring the interests of Jammu and Ladakh.

2) “There was a need for balanced development of the three regions in the state,” he said.

Amit Shah attacked both the People’s Democratic Party (PDP) and the National Conference (NC), saying “We had allotted Rs 40 crore for the development of Pashmina & Rs 45 crore for Pampore haat. The two families from NC & PDP ruled J&K for three generations but never did anything for Pashmina or Pampore haat.”

This was his first visit to Jammu and Kashmir after the saffron party withdrew support from the PDP-led government in the state. +

“The BJP workers have a special relationship with Jammu & Kashmir due to the contribution of Syama Prasad Mookerjee,” Shah said.

4) The BJP chief slammed Rahul Gandhi over the remarks made by Congress leaders Ghulam Nabi Azad and Saiffudin Soz over Kashmir, and said “Rahul should apologize for the statements made by his party leaders.”

“Media is creating its own narrative, linking anti-terror operations to governor’s rule. I appeal to the media to change the narrative. Ours is a narrative of development ,” says Shah.

“Under Narendra Modi’s government, most number of terrorists have been killed in Jammu and Kashmir,” says Shah.

7) PDP govt did not allocate land for AIIMS in Jammu: Shah

“The Centre approved AIIMS for both Jammu and Kashmir but the PDP government did not allocated land for AIIMS in Jammu. It is our right to demand our share,” says Amit Shah.

8) Cannot be part of government that discriminates against Jammu: Shah

Amit Shah says, “The Modi government sent several financial packages for the state, including a Rs 60,000 crore package. Prime Minister Narendra Modi came here over a dozen times. But Jammu and Ladakh were discriminated against.

“If development (in the state) is not balanced and Jammu does not progress, then we decided cannot be part of this (state) government,” he says.

“Under the PDP government, a newspaper editor was murdered. Children took up stone-pelting. Attacks on army and security forces increased. We could not be part of such a government,” Shah says.

“BJP is a patriotic party. We don’t care about power, we care about the development of the state,” he says.

BJP chief ends his address by reiterating that the party wanted equal development for Jammu, Kashmir and Ladakh and could not support a government that would not allow this.