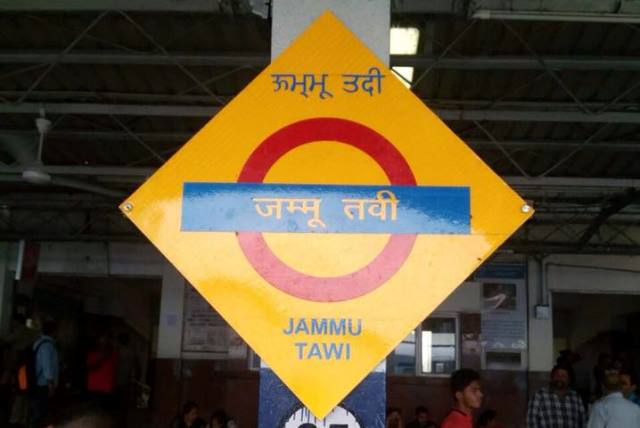 Lost in oblivion, hardly anybody in Jammu, let alone outsiders, know that Dogri has a script of its own. Called as Takri or Dogra Akkhar, it is a centuries old script related to Sharada script and closely resembling the Gurumukhi script. It was used for all administrative and social purposes till J&K acceded to India. Takri got replaced by Nastaleeq script which is used to write Urdu, all thanks to the complete and unjust shift of power to Kashmir valley.
Read also: Common but unnoticed facts about Dogri Language

Now limited to the books and notes of a few philologists and linguists of Duggar, there is no mention of the forgotten script today. Thankfully, a small step has been taken at the Jammu Tawi railway station. Along with the words Jammu Tawi written in the English and Devanagari alphabet an equal space has been given to the name in Takri also. Set on top of the signage, it is enough to fill any Dogra heart with pride and a sense of relief. Here is how Voice of Dogras shared the news.

Takri was as an official script in parts of north and northwest India from the 17th century until the mid-20th century. A version of Takri was the official script of Chamba State, which is now part of Himachal Pradesh, and was used to write Chambeali. In Jammu and Kashmir a version of Takri known as Dogra Akkhar was used to write Dogri. It was offically adopted in the 1860s, and was replaced by Devanagari in 1944.

Other names for Takri include Takari, Takkari Tankri and Ṭākarī. The origins of the name are uncertain: one theory is that it is derived from ‘ṭaṅkā (coin).

Since Takri fell out of use, efforts have been made to revive it for Dogri Kishtwari and Kulvi in the states of Jammu, Kashmir and Himachal Pradesh, where the local government has set up a programme to train Takri specialists in association with the Indira Gandhi National Open University.

There is considerable regional variation in the Takri alphabet with each state or region have its own version. The version above is of mainly Chambeali versions.

Used to write: Dogri, Chambeali, Gaddi, Jaunsari, Kashtwari, Kulvi, Mandeali and a number of other languages.”

We sincerely hope that more such steps are taken and Dogri alphabet is put on public display at more places so that people get curious about it and a movement may start for the revival of our lost heritage.