J&K government finally had to give up its reluctance towards forming a State Minority Commission. According to a response to the Supreme Court, Attorney General KK Venugopal has said

“The state government of Jammu and Kashmir has, in principle, given indication that (it) will consider and examine the need and feasibility of setting up of a state minority commission at the relevant point of time as and when need arises based upon the critical study of the social and educational backwardness of the minorities spread across various regions of the state”

The state government is said to have a formulated a special project, named Chief Minister Inclusive Development Initiative which will supposedly address the grievances of minority groups of the state.

Advocate Ankur Sharma, from Jammu, had filed a Public Interest Litigation, PIL, accusing the Mehbooba Mufti government of denying minority right to Hindus, Sikhs, Buddhists and Christians in Jammu and Kashmir. According to the PIL, the benefits meant for minorities were going to the majority community i.e. Muslims in Jammu and Kashmir.

According to data from 2011 census, the religious composition of J&K’s population is as 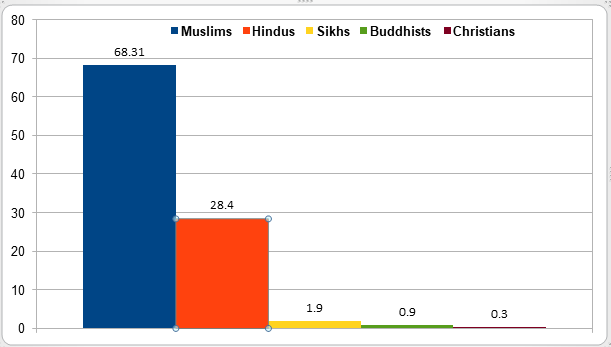 The Mehbooba Mufti-led PDP-BJP government of Jammu and Kashmir had earlier opposed creation of a minority commission in the state, saying it was not the only state where minorities declared under the National Commission for Minorities Act were in majority and there was no such body.

A community’s minority status is relevant mainly for accessing specific welfare schemes. This should not be a bone of contention: the Supreme Court has already ruled that such schemes launched by the Centre are for national-level minorities while local schemes would cover the state-level minorities.

In Jammu and Kashmir, Sharma argued that in the absence of a minority commission in Jammu and Kashmir, “crores worth aid are being given away to a certain community, which is the majority Muslim community, in an illegal and arbitrary manner”. No matter how they are designated in the state, Muslims, as a national minority, would continue to be beneficiaries of central minority welfare schemes.

Still, the step should be seen just as a sign of victory as there is still a long way to go before all the people of the state are given equal share in social, democratic and political spheres.