Gurha Slathia village of Samba is known for producing warriors and war veterans. Young lads of the village want nothing more or less than an opportunity to serve the nation’s army. The trend has been there even before India, in its present form, existed. Jammu Virasat brings to you story of such a veteran who became a centenarian this year. Meet Major Qabla Singh 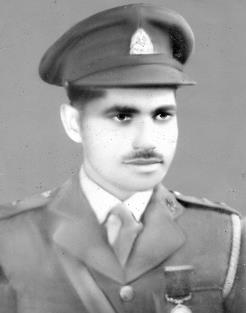 Major Qabla Singh was born on 2nd January, 1918 at village Gurha Slathia, Tehsil Samba Jammu. He studied at Gurha village upto 8th class and passed matriculation in 1936 from Samba High School. He was a scholarship holder throughout his academic career. Subsequently he joined J&K State armed forces in Sept 1936 and thereafter served at different places.
When the second World War started, he alongwith his Unit (JAK Rifles) was sent to Sudan in East Africa during Sept 1940 to fight in collaboration with British Armed forces against German allied forces (Italian Army) in which his unit played a major role to defeat and surrender of Italian forces. In view of his exemplary bravery in war, he was awarded with highly decorated Indian Distinguished Service Medal (IDSM). Thereafter, he also fought against German forces in Syria, causing huge casualty which included dozen of Senior German officers.

Read also: Common but unnoticed facts about Dogri Language
After that he also fought in Cairo (Egypt) along with British troops against German allied troops. In 1942 State forces were recalled back to India via Karachi and Peshawar to Jammu.

Keeping in view the bravery of Qabla Singh, Maharaja Hari Singh promoted him as Lieutenant in State forces in August 1942.
In 1948, when Pakistan invaded J&K along with ‘Kabalies, his armed unit fought back at Paragwal area Jammu, killing 16 of pathans of Baloch Regiment while rest ran away.
He was promoted as Captain and served at various places at Titwal (J&K), Gaya (Bihar) Srinagar and Leh and finally retired from Active services in 1970.

(with inputs from the Daily Excelsior)