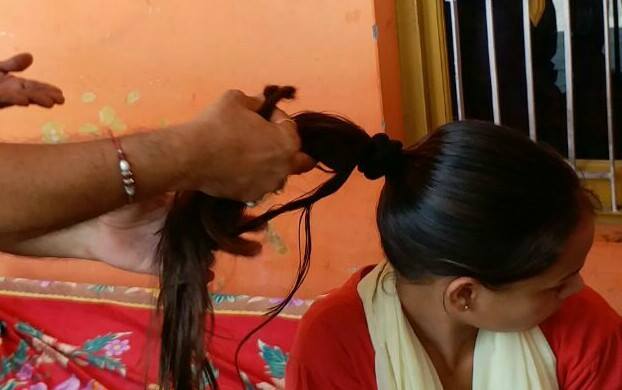 A strange fear has gripped the women of Jammu and adjoining areas of Jammu in the past few days. At least 7 incidents of women’s braids(Choti) being mysteriously chopped off have been reported from the villages of the Jammu, RS Pura and Samba region in last two weeks.

The bizarre incidents with no explanation whatsoever, have left the villagers in panic mode and the local police baffled.

As  reported in Daily excelsior , a lady residing in Raiper area noticed that her hair has been cut by some unidentified persons probably of hair cutting gang, which is active in many parts of Jammu and Samba districts for the past over one week.

Women across Jammu  claim that they either see a cat or the apparition of a man, following which they fall unconscious.

Many of the victims, some of whom had went unconscious after their hair chopped off, awoke with signs of red tridents branded onto their skin.

They felt a terrible headache and lost consciousness, they claimed, and woke up to find their braids gone. The second incident happened in Mehmoodpur village of Bishanah, where a braid of a housewife identified as Toshi Devi, 45 was chopped off when she was cleaning utensils.

All the women in question are reported to be in extreme trauma and still terrified.

The police is absolutely clueless

As reported in Daily Excelsior, SDPO RS Pura Surinder Choudhary said that it is a mystery which needs time to get solved. “I am sending the hair cut samples to laboratory to check out the equipments used for cutting the hair”, he said, adding that police is investigating all the angels to reveal the mystery behind. Three such incidents had taken place in Bishnah, one in Treva Arnia and one in RS Pura, he informed.

In other incident which is reported in Greater Kashmir, the incidents have left even the police baffled. Deputy Superintendent of Police, RS Pura Surinder Choudhary visited the spot after he received the information.

“We spoke to the victims and her family members but nobody saw anything,” he said.

“The matter is becoming very complicated, the hair of women had been chopped off and there is no doubt about that,” he said, adding that still they were looking into it but so far “we are not in position to comment beyond this”.

Pertinently, the rumour of a ghost cutting women’s hair started from Rajasthan and then some incidents were reported in Delhi, Haryana, Punjab and now in Jammu.

To deal with the rising apprehension caused by these incidents, women have been asked to tie their hair in buns instead of braids.

Meanwhile, rumours of aliens, cat-man, mystery man and involvement of other mythical creatures have contaminated their way into the city.

We believe the only people profiting from the whole occurrence are godmen called ‘bhopa’, who are cashing in on this opportunity to assuage people’s fears.