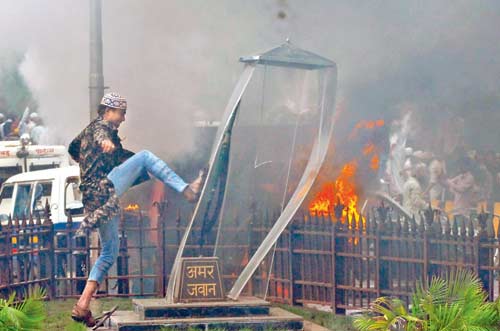 Immigrants finding refuge in the city of Jammu is not something new. The city has witnessed waves of migrants beginning with the people from POJK and West Pakistan after the violent partition, the Kashmiri Pandits fleeing persecution in the valley during the early 90s followed by migrants from the terrorist infested areas of Doda and Kishtwar. All these migrants over the years assimilated into the broader culture of the city and have made Jammu a unique melting pot that it is today. But for the past few years, a set of immigrants called the ‘Rohingyas’ slowing trickling into Jammu has raised alarms and caused great unease.

Rohingyas whose ancestors were Bengali Muslims belong to the Rakhine province or the Arakan area of Myanmar (the word ‘Rohingya’ translates to ‘resident of Arakan’) which is also home to the Arakanese Buddhists (with history of animosity between the two communities). The first Bengali Muslims had arrived in Arakan after the Arakanese King became a vassal of the Bengali Sultanate in the year 1430. The British conquest of Myanmar (or Burma) increased the immigration of Bengali Muslims from the Chittagong area of present day Bangladesh into Arakan. With a view to counter the Japanese during WWII (who had captured Burma) the British provided arms to the Rohingya. It is believed that the weapons were mainly used by the Rohingyas in campaigns against the Arakanese Buddhists rather than countering the Japanese wherein Buddhist monasteries, pagodas and houses were destroyed and atrocities committed.

The matters were aggravated by the Pakistan Movement orgainsed by Rohingya Muslims in western Burma to merge the region with East Pakistan at the time of independence. For these reasons once Burma gained independence, successive Burmese regimes have followed a policy of discrimination and persecution of the Rohingyas refusing to recognize them as Burmese in the process. The Rohingyas facing persecution in Myanmar (formerly Burma) have been seeking refuge in different countries of the world with an estimated 36,000 Rohingyas currently residing in India.

A basic search on the internet will reveal that the distance between Jammu and Myanmar is 3504 km. If someone was to travel from Myanmar to Jammu, they need to cross borders into Bangladesh, then again cross borders into India, then traverse through the states of West Bengal, Bihar, Uttar Pradesh, Haryana and Punjab in order to reach Jammu. This is apparently what more than 10,000 Rohingyas have already done and are today living in different parts of the city (primarily in the Narwal, Bhatindi, Qasim Nagar and Bhagwati Nagar areas).

When people escape war torn Syria and travel through countries into Germany (3731 kms away from Syria and roughly the distance between Jammu and Myanmar), the action is perhaps understandable because Germany happens to be one of the most developed countries in the world with a high quality of life. But it only surprises when the Rohingyas choose to traverse borders into a not so prosperous region of India which itself suffers from turmoil. If the persecuted Rohnigyas were seeking peace and prosperity why did they not choose Delhi or Gujarat or Maharashtra instead of choosing one of the farthest corners of the country? Perhaps the Rohingyas did not choose Jammu, it is quite possible that someone else (a group or an organization) chose Jammu and aided the Rohingyas to settle in this region so as to achieve their ulterior motives.

There are many in India and some in Jammu who will argue that the lure of higher wages or pure economic considerations has resulted in the Rohingyas choosing to settle in Jammu. Others adept at interpreting data may argue that the proximity of Jammu to the International Border with Pakistan (which is home to over 2,00,000 Rohingyas) and the hope of eventually migrating into Pakistan is the real reason for a disproportionately high number of Rohingyas settling in Jammu.

While others may still say that the Rohingyas have been settled in the area by people associated with the Jamaat-e-Islami or other radical Islamist organizations as part of their sinister plan to change the demographic profile of the area and to create unrest in the largely peaceful Jammu region.

After all, the separatist organizations which have always opposed residency rights to West Pakistan refugees (settled in Jammu for the last 70 years) or the temporary allocation of land to Hindu pilgrims in Kashmir are among the greatest advocates of Rohingya refugees living in the state. Asiya Andrabi lead Duktran-e-Millat and the Hizbul Mujahidin have already come out in the support of the Rohingyas which has only alleviated the fear of the average Dogra and increased the mistrust of the Rohingyas. Therefore, the angle that the Rohingyas have been encouraged to settle in Jammu as part of a larger mischievous plan to create communal imbalance cannot be ignored as the circumstantial evidence available gives credence to this theory.

Although, it may be attributed to poverty but already 17 FIRs have been registered against 38 Rohingyas living in the city on charges of theft and trafficking. In addition, it is indeed a matter of grave concern that some of these migrants from Myanmar have even managed to acquire the elusive state subjects of J&K, a right which has otherwise been denied to thousands of people from various parts of India (and living in Jammu for decades) citing the special status of the state. Such developments have certainly not helped in allaying the fears of the people of Jammu pertaining to this community.

The Pakistan sponsored insurgents have repeatedly tried to alter the demography of most regions of the state. The patience of the people of Jammu which has already been tested over and over again should not be allowed to reach the point of no return. Therefore, it is in Jammu’s and the larger Indian interest to ensure that this issue is settled before it aggravates into a full blown problem and further complicates matters in this troubled state. After all more than 10,000 migrants with dubious credentials in a communally sensitive medium sized city like Jammu can certainly have adverse effects. With little expectations and even lesser faith in the state government machinery, one can only hope that the central government takes note of Jammu’s Rohingya problem and evicts them to a suitable place which can absorb these migrants in a better manner.