The National Investigation Agency (NIA) has found documents that list dates and when protests and other activities related to civil unrest was to be carried out in the Valley following the shooting of Hizbul Mujahideen leader Burhan Wani.

A detailed protest calendar issued and signed by Hurriyat hardliner Syed Ali Shah Geelani recovered by the NIA, points to the role of separatists in organizing events in coordination with handlers in Pakistan that led to widespread violence in Kashmir.

The ‘protest calendar’, recovered from Geelani’s son-in-law Altaf Ahmad Shah ‘Funtoosh’, establishes how systematically Hurriyat has stoked the violence that resulted in hundreds of injuries and several deaths in clashes between stone pelters and security forces. 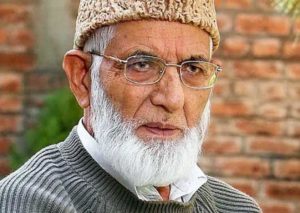 ntended to fan radicalism, involved local clerics and separatist cadres as well as activists of opposition parties and were funded by Hurriyat in concert with Pakistani agencies, the NIA investigations indicate.

For example, on August 6, 2016, Geelani called for assembling and occupying local chowks and centres in the vicinity of mohallas, villages and localities and playing of Islamic and azadi taranas (songs) in masjids.

Meanwhile, the anti-terror agency on Sunday raided and questioned Devinder Singh Behal, chairman of Jammu and Kashmir Social Peace Forum (JKSPF) and a member of Hurriyat’s legal cell. Sources said JKSPF was a constituent of All Party Hurriyat Conference’s Geelani faction and Behal was closely associated with the latter.

It is investigation Behal’s role as a “courier” as he is suspected to be involved in routing funds to separatist leaders from Pakistani based handlers, he said.

During the searches on Behal’s house and office, NIA said it recovered four mobile phones, a tablet and other electronic devices and documents related to terror funding probe, financial documents and other articles.

The protest calendar recovered by NIA marked the activities for August 2016, the period when Jammu & Kashmir saw maximum number of protests and stone pelting incidents following the killing of Burhan Wani.

On August 8, the activity mentioned was to block all roads towards and around the civil secretariat in Srinagar and tehsil offices and to ensure that no employee was able to join duty.