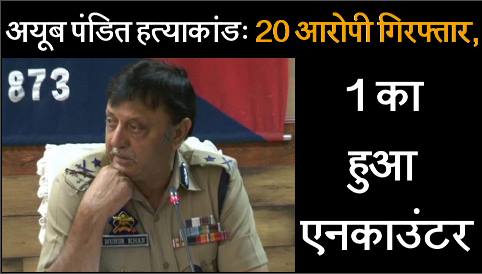 Hizbul Mujahideen terrorist Sajid Ahmad Gilkar, who played a key role in instigating the mob to lynch DSP Ayub Pandith, was killed by security forces in Budgam district on July 12, the Jammu and Kashmir Police confirmed on Monday.

Addressing a press conference, Inspector General of Police (IGP) Muneer Khan confirmed that 20 persons have been arrested in connection with Pandith lynching case.


“This is when Gilkar played a big role in instigating the mob against DSP Ayub Pandith,” Khan added.

A mob lynched the senior police officer in Srinagar, triggering outrage and forcing chief minister Mehbooba Mufti to dub the crime a “murder of trust”.

DSP Pandith was stripped and stoned to death by a mob outside the historic Jamia Masjid in Nowhatta area of downtown Srinagar on June 22.

The battered body of deputy superintendent Mohammad Ayub Pandit was recovered outside the Jamia Masjid in Nowhatta area of the Old City.

Gilkar was involved in grenade attacks on the CRPF at Nowhatta on April 22, Khanyar police party on April 30 and SafaKadal CRPF camp on June 21.