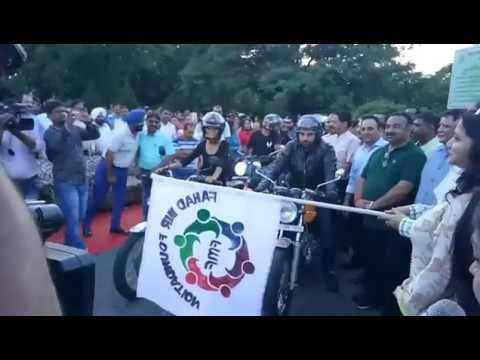 The rally comprising around 20 bikes and equal number of cars will conclude at Drass after covering 600 KM distance Jammu to Kargil. The participants of the rally include three female, including two car drivers and a biker.


The rally is being organized by ‘Fahad Mir Foundation’ in Association with ‘Care Nature and Environment’ with motto  “Our Army, Our Pride’ to pay homage to Indian Army Soldiers who have laid their life protecting Indian’s border and integrity and those who are serving the nation.

The rally was flagged off in presence of a large gathering who wished the participants safe journey and expressed solidarity with Army personnel. The people present also took a pledge to honour and give due respect to the men in uniform.
Renowned celebrities from Bollywood, Randeep Hooda and singer Kailash Kher will also join the rally at Kargil .