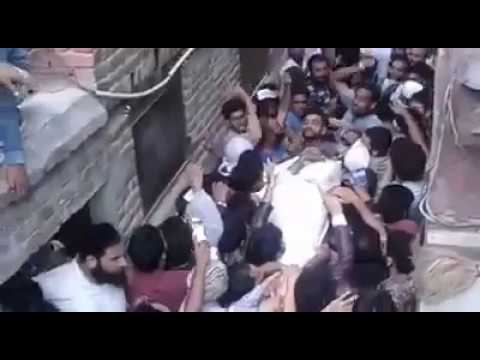 Terrorist Sajad Ahmad Gilkar, a terrorist and the leader of the mob, who brutally lynched Dy SP Ayub Pandith was gunned down a few days back.

His funeral made news as he became the first terrorist, in 28 years of militancy in the state, to be wrapped in Islamic State flag before being buried. The funeral was also audience to pro Musa slogans. Musa, or Zakir Musa, is the same terrorist, who claimed a few days back that militancy in Kashmir has nothing to do with Azaadi and their ultimate goal is to set up an Islamic Caliphate here in Kashmir.

Now Jammu Virasat has found a video on youtube which shows Sajad’s body being taken to the funeral. In the video, some people are trying to lay Pakistani flag on the dead body of Sajad. Suddenly a few person snatch away the Pakistani flag and throw it away.

The rest is history as later his body was wrapped in the dreaded IS’ flag. This video is a clear indicator of the religious fundamentalism playing its part in Kashmir unrest. Here is the video