The last ruler of Jammu and Kashmir was Maharaja Hari Singh, who ascended the throne in 1925. He made primary education compulsory in the State, introduced laws prohibiting child marriage and threw open places of worship for the low castes. Hari Singh was as a member of Churchill’s British War Cabinet in WWII, and supplied troops for the Allies. 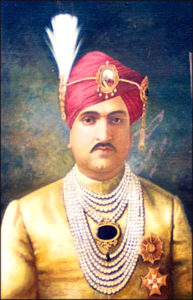 Singh’s reign saw the accession of Jammu & Kashmir to the newly independent Indian Union in 1947. He originally manoeuvered to maintain his independence by playing off India and Pakistan against each other. There was an armed movement against the Maharaja’s rule especially in the Poonch district of Jammu, when his troops were unable to control these fighters and his troops retreated to Jammu, in October 1947, Singh appealed to India for its help. He acceded to India, though there is considerable controversy over exactly at what point,and whether or not his accession included the sovereignty of the state.

In June 1952, Singh’s rule was terminated by the state government of Indian-administered Kashmir. His son Yuvraj (Crown Prince) Karan Singh too abdicated and was elected Sadr-e-Riyasat (‘President of the Province’) and Governor of the State in 1964.