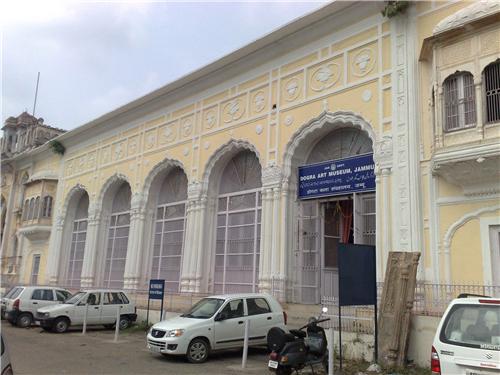 Dogra Art Museum, Jammu previously known as the Dogra Art Gallery is a museum of Dogra cultural heritage housed in the Pink Hall of the Mubarak Mandi complex, Jammu. The main attractions of the museum are the Pahari miniature paintings from Bhasoli.

Dogra Art Museum, Jammu is a government museum and the biggest in Jammu region, one of the three divisions in the north Indian state of Jammu and Kashmir. The museum is unit of Directorate of Archives, Archaeology and Museums, under the Ministry of Tourism and Culture, Jammu and Kashmir Government. The building was erected in commemoration of the visit of the British Monarch Edward VII when he came to Jammu as the Prince of Wales in 1875. This building housed the Public Library as well as the Museum.

The museum has a collection of 7216 objects of historical and cultural importance. Among the collections are the Rasmanjari series of the famed Basohli miniature paintings and some rare manuscripts like the beautifully illustrated Shahnama and Sikandernama in Persian.

Terracotta heads from Akhnoor, Sculptures, numismatics, manuscripts, Dogra costumes, jewellery, arms and armours, metal objects and artifacts related to Decorative arts. The intricately decorated marble jharokhas with inlaid work of semi precious stones in the marble hall further embellishes the charisma of the museum collection. However, what the museum is known all over for is the Pahari miniature paintings from Basholi. A gold plated bow belonging to Mughal emperor Shah Jehan and a stone plate with inscriptions in Takri Script are among some of the most prized possessions of the museum.

The museum is open from 10 O’Clock in the morning till 5 O’Clock. It remains closed on Mondays. Minimal entry fee is required to enter the museum premises.